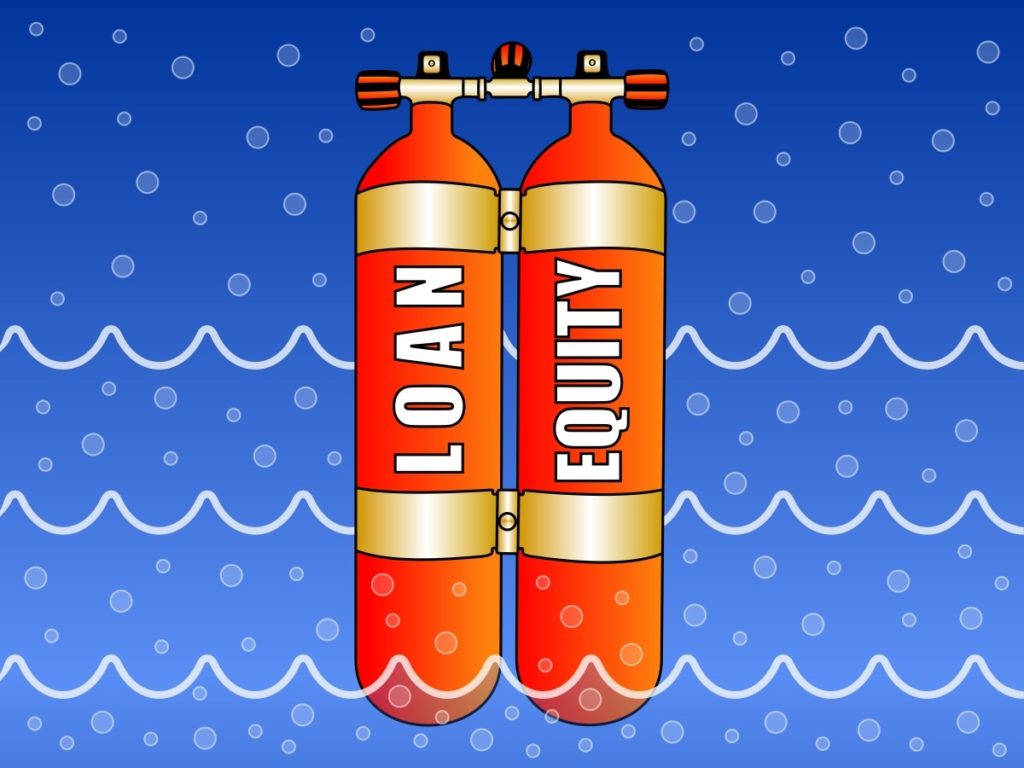 As an entrepreneur looking to invest capital in a startup, it is important to decide whether such contributions will be loans or if they are actually purchases of ownership interests in the company.  A decision to lend must be contemporaneously documented.  The lender should act as a lender from then onward.  For instance, he or she must insist on periodic payments of principal and interest culminating with a maturity date.  Failing to do so may cause the investment to look more like equity and to be treated as equity by the IRS.

Lending money to and purchasing equity in a business are two common methods of investing.  The former is generally considered safer for many reasons, including the tax treatment of losses.  A recent Tax Court case by the name of Burke v. Commissioner of Internal Revenue (CIR), not only illustrates some important features of loans, such as fixed interest rates and set maturity dates, it also analyzes the different tax effects of an investor’s choice to lend when his or her investment decreases in value. See T.C. Memo. 2018-18  (Feb. 21, 2018).  In short, the circumstances of each loan must demonstrate an intent to lend, rather than to buy equity, in order to take this deduction.

Diving Deep in to Burke v. Commissioner of Internal Revenue

Michael Burke, the petitioner, and college friend (from long ago) Hugh Parkley shared a lifetime interest in scuba diving.  Both had qualified as instructors earlier in life and eventually went into business together in their later years.  Parkley approached Burke about opening a scuba diving company called Belize Dive.  After much discussion, Burke decided to lend Parkley money in return for an “interest” in the business.  The first of these transactions was a “loan” of $30,000 from Burke to Parkley in 1995 without formal documentation.  Burke recorded the transaction on his own books and gave copies to Parkley.  Each owned half of the new company, with Parkley running daily operations and Burke sending money to help make ends meet every year.  They operated this way until 2002, when Parkley died.

After Parkley’s death, his wife took over management of the company for both she and Burke.  Under her management, Belize Dive grew and acquired additional assets, but never had sufficient income to cover its costs without annual cash infusions from Burke until 2011.  Some of the expansions and purchases included a fishing business with local cruise lines, scuba and snorkeling for cruise lines, purchase of a 168-acre island, construction of an atoll on the island for swimming with dolphins, and the addition of a third partner.  All told, Burke contributed over $11 million to Belize Dive in annual payments ranging from $30,000 to just over $2 million.  None was accompanied by formal loan documentation or a timeline for repayment.  Burke never received a single repayment and only expected to receive payment when the business was profitable.  Conversely, loans to Belize Dive from other lenders were documented, formal, and repaid.

Tanks for Nothing: Post Hoc Tax Planning Not Received Well by the Tax Court

In 2010 and 2011, Burke began working with some California tax attorneys to file tax returns for an unrelated investment in which he had gain.  Those attorneys looked to Burke’s losses in Belize Dive to offset some of that gain.  As part of that planning, they created three promissory notes for a total of roughly $11 million, all of which were signed by Mrs. Parkley on behalf of Belize Dive in 2010.  This debt was then retired and/or sold to Mrs. Parkley in return for additional ownership interests in the scuba diving company.  Ultimately, Burke owned roughly 82.5% of the company leaving Mrs. Parkley with 15% and the third partner with the rest.

The Tax Court was not impressed with these maneuvers:

“… the promissory notes, the sale of the note to Mrs. Parkey, and the deferred compensation agreement were more likely than not orchestrated by Burke and his attorneys to offset the large capital gains Burke had from unrelated interests in his 2010 and 2011 tax years. They are not proof of what they purport to show happened before they were all executed.”

Based on that documentation, however, Burke claimed nearly $3 million in short and long term capital losses in 2010 and 2011.

Burke presumably took the position that the un-repayable loans were then-deductible under the IRC Section 166 as bad debt.  The IRS Commissioner argued that his losses were from equity interests that were passive (or some other non-recognition event like an IRC Section 368 recapitalization).  As such, his unrelated losses could not be deducted against his 2010 gains.

The sole issue was whether Burke’s transfers of money to Belize Dive were loans or purchases of equity.  Authority from the Tax Court and the Ninth Circuit controlled:  “A bona fide debt is one that “arises from a debtor-creditor relationship based upon a valid and enforceable obligation to pay a fixed or determinable sum of money.” Sec. 1.166-1(c), Income Tax Regs.; see also Kean v. Commissioner, 91 T.C. 575, 594 (1988).  In the Ninth Circuit, a multi-factor facts and circumstances test is used to determine whether the contributions were debt or equity (not emphasizing any one factor over the others).  The goal in this balancing act is to discern the parties’ intent at the time of the transactions.

(1) Titles of the Purported Loan Documents. No documents were created at the time of Burke’s transactions and the post hoc tax planning as given no weight by the court.  Belize Dive’s unrelated creditors were not treated this way, so the first factor weighed in favor of equity.

(2) Existence of a Fixed Maturity Date. The loans had no fixed maturity date and Burke only expected to be repaid with profits.  This factor weighed in favor of equity.

(3) Source of the Repayments by the Business. Tax Court precedent held that repayments based on earnings is a sign of equity, rather than debt, financing.  This was precisely the situation in the instant case.

(4) Transferor’s Right to Enforce the Payment of Principal And Interest. Burke’s informal documentation did not create an enforceable obligation for Belize Dive to repay the loan, so this factor also weighed in favor of equity.

(5) Transferor’s Participation in Management. Equity financing generally comes along with additional management rights.  Burke was rather passive when it came to management of Belize Dive.  Although he initially received 50% and sometimes received additional equity shares of the company in return for some of his contributions, he did not always.  Burke did not participate in day-to-day management.  With forces pushing in both directions on this factor, it was found to be neutral.

(6) Status Equal to or Inferior to That of Regular Corporate Creditors. Subordination to other creditors is an indicator of equity.  Several of Burke’s “loans” took subordinate positions to those of other lenders, so this weighed in favor of equity.

(7) Subjective Intent of the Parties (Recognizing this Begs the Question). Though a bit circular to include the ultimate objective of the factor analysis as a factor itself, contemporaneous evidence of the subjective intent of the parties is one of the many factors to consider.  Burke provided evidence and testimony of his own intent, which was not very persuasive to the Tax Court.  No one from Belize Dive testified.  Ultimately, the fact that other non-related creditors were treated more conventionally as creditors, i.e., by having their loans repaid, led the court to find that this factor also weighed in favor of equity.

(8) Adequacy of Capitalization Wasn’t Argued. Although thin or or inadequate capitalization is strong evidence of a capital contribution in certain circumstances, neither party argued this factor.  It was found to be neutral.

(9) Identity of Interest Between Creditor and Stockholder. When Belize Dive did not have enough money to cover its operating expenses, Burke gave more.  This was consistent with prior Tax Court precedent in which similar behavior created an identity of interest between the purported creditor and the controlling shareholder.  This factor showed equity.

(10) Payment of Interest Only Out of “Dividend” Money. No evidence other than Burke’s testimony showed the “loans” were supposed to accrue interest.  Burke did not ask for payments and it did not appear as if Belize Dive intended to pay it until it earned a profit.  This set of circumstances gave the court the impression that Burke’s contributions were for equity.

(11) Ability of the Corporation to Obtain Loans from Outside Lending Institutions . This was the only factor that weighed in favor of a finding of debt financing.  Belize Dive was able to obtain financing from other, non-related sources.  The Commissioner actually misapplied this in its original analysis, but this reversal was not enough to outweigh the other factors.  This was the only factor for which the court found the evidence showed debt financing.

The court concluded that Burke’s transfers of money to Belize Dive in return for increased ownership, and without a maturity date or stated interest rate, were not currently-deductible bad debt financing.  Burke was not entitled to currently deduct his passive equity losses against other, unrelated gain.  The various actions taken by Burke’s tax attorneys in 2010 were treated as IRC Section 368 tax-free recapitalizations rather than the sale of his equity in Belize Dive back to Mrs. Parkley.  The Commissioner failed to carry its burden regarding accuracy-related penalties, so Burke escaped liability from them.

In the absence of the normal incidents of a loan-especially a maturity date, a stated interest rate-Burke’s advances of money to Belize Dive were capital contributions in return for equity in the company.  Post hoc tax planning might actually nudge the Tax Court in the other direction, toward a finding that the transfers of cash were actually capital contributions.

Next Post: Failure to Report Ownership of a Foreign Business Can Incur Penalties of $10,000 and More