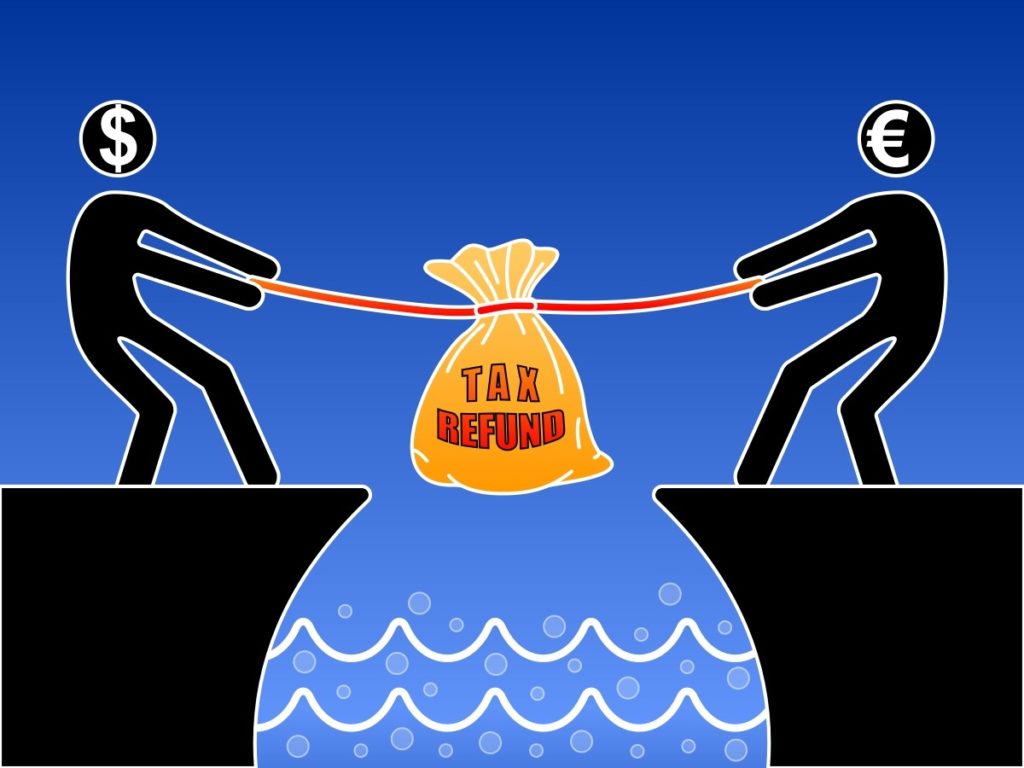 U.S. taxpayers who work and pay income taxes abroad often receive credits on U.S. taxes for amounts paid to the foreign tax authority. When the foreign jurisdiction refunds some of that money, the taxpayer must report the refund and pay taxes on it to the U.S. Although there may be some doubt about ultimately keeping the full refund due to other disputes with the foreign tax authority, the Tax Court and IRS require a refund to be reported when it is received. Sotiropoulos v. Commissioner of Internal Revenue (CIR), 2017 T.C. Memo 75 (May 1, 2017).

An American Banker in London Overpaid Her U.K. Taxes

Petitioner, a U.S. citizen, lived in London and worked at Goldman Sachs. The company withheld Her Majesty’s (British) taxes for petitioner and reported the withholding as a credit on petitioner’s U.S. taxes. Petitioner also invested in some British film partnerships whose structure generated large, questionable tax deductions. Although she reported actual payment of her British taxes on timely filed U.S. tax returns for the years at issue, the payments were too large. The difference was refunded but not reported to the IRS. The IRS assessed a deficiency and petitioner asked the Tax Court whether the tax liability she anticipated to Britain because of ongoing action by the British tax authority to collect additional taxes from the film partnerships placed her “refund” in sufficient doubt to excuse her from reporting it to the IRS. Sotiropoulos v. CIR, 2017 T.C. Memo 75 (May 1, 2017).

In general, a U.S. citizen may elect to take a foreign tax credit against her U.S. income taxes for income tax paid or liability accrued to a foreign country. IRC Section 901(a). A special procedure allows the U.S. taxpayer to adjust the amount of foreign tax payments claimed by amending her return, in relevant part, when some of that foreign tax is refunded. IRC Section 901(c)(1)(C); Tax Regs Section 1.905-4T(b)(1). Historically, the taxpayer needed to self-report adjustments and refunds (Pac. Metals Corp. v. Comm’r, 1 T.C. 1028, 1029, 1031 (1943)) though in this case, the refund was discovered by the IRS through information sharing made possible by the internet. Any additional U.S. tax liability must then be paid to the IRS. IRC Section 905(c).

A Rose by Any Other Name

The petitioner stipulated that she paid taxes to Britain and that almost all of that was returned. The controversy was whether the return of that money met the definition of a refund under IRC Section 901(c)(1)(C) because of her expectant liability.

The Tax Court began with the plain language of the statute in a domestic (U.S. law) context. “A ‘refund’ is commonly defined to include ‘the return of money to a person who overpaid, such as a taxpayer who overestimated tax liability or whose employer withheld too much tax from earnings.’ Black’s Law Dictionary 1472 (10th ed. 2014).” The court found that money paid to petitioner by Britain for taxes she overpaid fell squarely within this definition. “For U.S. tax purposes, the term ‘refund’ does not connote finality or the final determination of a tax liability.” Sotiropoulos at 17. This was consistent with the meaning of the word in the context of this particular tax statute as interpreted by binding case law. Goodyear Tire & Rubber Co. v. U.S., 14 Cl. Ct. 23 (1987), rev’d on other grounds and remanded, 856 F.2d 170 (Fed. Cir. 1988), rev’d and remanded, 493 U.S. 132 (1989). “In short, the fact that a taxpayer may ultimately have to repay the money initially refunded to her does not mean that she did not get a ‘refund.’” Sotiropoulos at 17.

Even assuming petitioner would eventually need to repay the taxes refunded by by Britain in future tax years, she still needed to report the refund and pay U.S. tax on that money for the years it was received. In dicta, the court explained that petitioner could claim foreign tax credits when Britain eventually collects the taxes that petitioner currently believes she will owe.

Previous Post: Failure to Report Ownership of a Foreign Business Can Incur Penalties of $10,000 and More